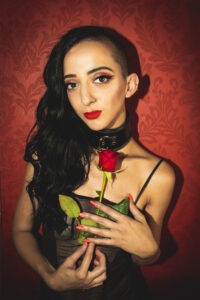 Gabriela Herstik is the author of Inner Witch: A Modern Guide to the Ancient Craft, Bewitching the Elements: A Guide to Empowering Yourself Through Earth, Air, Fire, Water, and Spirit, Embody Your Magick: A Guided Journal for the Modern Witch and most recently Sacred Sex: The Magick and Path of the Divine Erotic. She has written for outlets such as VOGUE International, Glamour, i-D, Cosmopolitan, and Dazed Beauty on witchcraft and magick, contributed essays to Taschen’s Witchcraft and Becoming Dangerous, and has headed columns for NYLON, High Times, and Chakrubs on the intersection of glamour, sexuality, and the Feminine Divine. She has been featured in publications around the world such as The Guardian, LA Weekly, Tattler Asia, The Atlantic, and VOGUE Spain on her contribution to the occult milieu and has led classes and workshops for Treadwells, Catland, Modern Witches Confluence, and The Sex Magick Summit. Gabriela has been a practicing witch since the tender age of 13, and is a devotee of the Goddess of Love and Lust. Gabriela leads kinky rituals and discussion circles, writes ritual guides for the lunations and holidays of the Witch, and creates erotic art inspired by the power and magick of the flesh. She believes magick is for everyone. You can keep up with her at gabrielaherstik.com and on Instagram and Twitter.