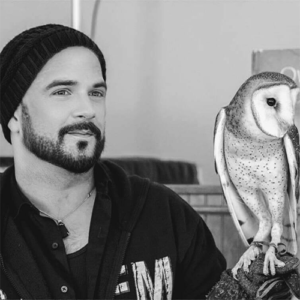 Mat Auryn is the multiple-award-winning author of the internationally best-selling Psychic Witch: A Metaphysical Guide to Meditation, Magick, and Manifestation, translated in over ten languages. He is also the author of Mastering Magick: A Course in Spellcasting for the Psychic Witch. He is a witch, an occult teacher, a highly sought-after speaker, and a retired professional psychic based in the Bay Area of California. He has been drawn to the occult and metaphysical since an early age, reading books on witchcraft at eight years old.

He is an initiate of Black Rose Witchcraft, the Cabot Tradition of Witchcraft, and the Temple of Witchcraft, as well as several other esoteric orders. He serves as a high priest in the Sacred Fires Tradition of Witchcraft. Mat has had the honor and privilege of studying under many prominent witchcraft teachers and elders. He is an instructor at Modern Witch University and has been featured in various magazines, radio shows, podcasts, books, anthologies, blogs, and other periodicals, including his column in Witches & Pagans Magazine entitled “Extra-Sensory Witchcraft.”

Mat was the very first recipient of the “Most Supportive Witch Award” presented by Witch Way magazine for helping others in the witchcraft community and going above and beyond to make other witches feel like they are not alone. Mat has had the honor of helping thousands of people throughout the world gain clarity through his skills of psychic ability and tarot reading over the last decade. Mat teaches various metaphysical and occult subjects such as psychic development, magickal empowerment, working with spirits, divination, energy healing, lucid dreaming, and astral projection. To find out more about him and his work visit www.MatAuryn.com, www.ModernWitchUniversity.com, or on social media at @MatAuryn.